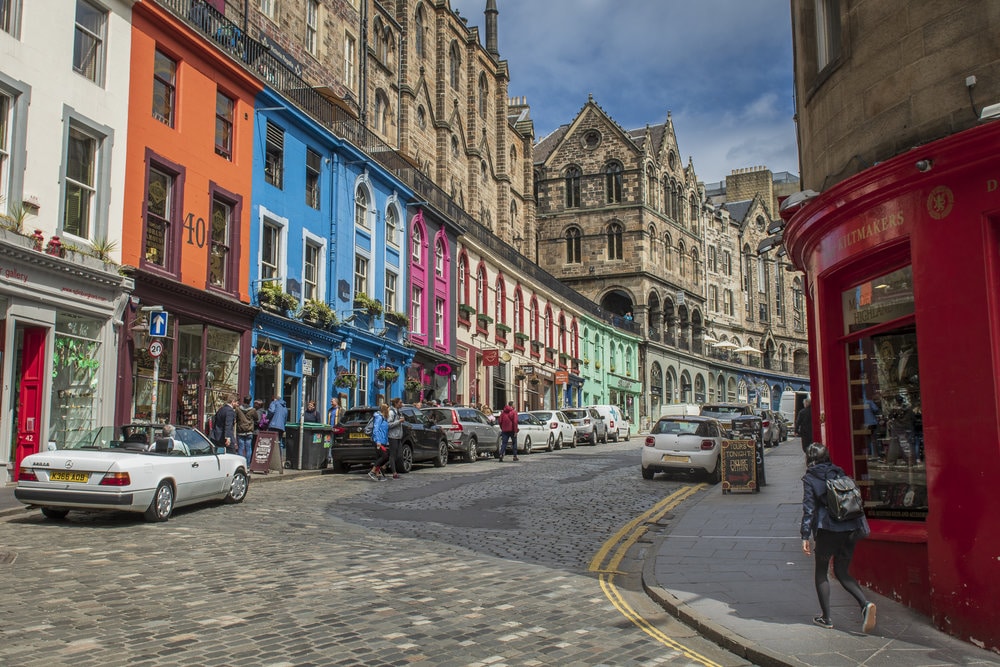 I grew up with Harry Potter. Literally. I read the first book when I was 10 and the last one when I was 16. The series has been part of my teenage years and I devoured each single book. Funnily enough, I did not do that many re-reads. I did watch the movies many many times however. And also made some life decisions based on on the books. For example, knowing Edinburgh had a lot of Harry Potter sites made me choose it as University for my Masters.

Officially, I picked the University of Edinburgh because it is one of the best in the UK and in the world. It is part of the Russel Group and the Business School produces a lot of entrepreneurs. Plus, well, the city is super pretty and has a lot of history. Unofficially, yes, knowing that a lot of Harry Potter sites are in Edinburgh helped motivate my decision.

And there are quite a few of them. Some official and confirmed, some not. But I put together this list of 10 must-see Harry Potter sites in Edinburgh for all the fans out there!

The Elephant House is probably one of the most famous Harry Potter sites in Edinburgh. Simply because it is the location with the strongest connection to the book series. Why? It is the self-proclaimed birthplace of Harry Potter. The author would have indeed written a lot of the books at The Elephant House.

The café was also frequented by a number of other famous writers such as Ian Rankin and Alexander McCall-Smith. It is quite a popular place so be ready to wait and queue before you can get to your table. The Elephant House serves brunch, lunch and dinner. Stop for a full meal or coffee and pastries as you wish.

The Elephant House is also very close to some other major Harry Potter sites, including Victoria Street, Grassmarket, Greyfriar’s Kirkyard and the Edinburgh Castle.

FACT OF FICTION: J.K. Rowling has definitely spent some time there. Interview materials and photos prove that she wrote some of the books there. However, she started to write the series before visiting this café. She started to work on the novel in 1990 and moved to Edinburgh in 1993, finishing the manuscript in 1995. The Elephant House only opened in 1995.

The most famous is the grave of Thomas Riddell which may have inspired the name for Lord Voldemort, also known as Tom Marvolo Riddle. Other characters would take their names from tombstone. Such is the case of Minerva MacGonagall. The gravestone of William McGonagall inspired her name. There is also the grave of Mrs. Elizabeth Moodie which would have inspired the character Alastor “Mad-Eye” Moody.

Finding the tombstones will not be difficult. Just follow the tourists and fans. However, remember that the Church and graveyard are active so be as quiet as possible.

A post shared by A World To Explore | Singapore (@mrjuliuslim)

Victoria Street is one of the prettiest streets in Edinburgh. It is also one of the most instagrammable locations in the city. Each house or shop on the street sports a different color. The result is striking and looks amazing on photos of course. Plus, the road is all cobblestones. The street stretches on two levels. The upper street gives access to the Royal Mile and a bird view of the lower street.

Victoria Street is thought to be the inspiration behind Diagon Alley. It is mostly a fan theory. However, the cobblestones on the ground and the colorful building make it quite believable. The street is also the home of a lot of Harry Potter themed stores.

It is basically heaven for people searching for a good photo opportunity and for fans of the books! It is a pretty popular street and always very busy so you better get there early if you want a photo without tourists in the background.

FACT OR FICTION: There isn’t really anything out there that confirms whether Victoria Street is indeed the inspiration behind Diagon Alley. Since the author lived in Edinburgh while writing the books, it is possible she walked along that street but she did not confirm anything.

WHERE: Victoria St., Edinburgh EH1 2HE

Before you have a laugh, know that locals pronounce that street “Co-burn”. Cockburn Street is a street that is located in Old Town, not too far from Victoria Street. And just like the later, Cockburn Street is also thought to have inspired Diagon Alley.

Just look at the buildings and layout of the street. The hodgepodge and higgledy-piggledy layout does give a feel of Diagon Alley and the street has a magical atmosphere. You’ll find a lot of small shops around, including some Harry Potter stores.

Yes, they are everywhere.

FACT OR FICTION: The author never confirmed that Cockburn Street did indeed inspire Diagon Alley. Regardless, it is pretty and perfect for pictures!

Built in 1628, George Heriot’s School is a co-ed prestigious primary and secondary school. Dating for the Scottish Renaissance, the building has a style and architecture that is typical of Edinburgh. Other buildings in the city sport similar feature.

However, it is dubbed a Harry Potter site simply because a lot of fans believe that the school is what inspired, well, the Hogwarts School of Witchcraft and Wizardry. Because the school is active, it is not open to the public. Fans will not be able to snap a shot inside.

You can still see if from afar in different locations: Greyfriar’s Kirkyard, Lauriston Place, Edinburgh Castle esplanade, and the George IV Bridge.

FACT OR FICTION: J.K. Rowling never actually confirmed that George Heriot’s School served as the inspiration behind Hogwarts. She had already started to write the books before she moved to Edinburgh but still imagine the school to be in Scotland.

The Balmoral is a very famous landmark in Edinburgh and a 5-star 19th century hotel. You basically see it everywhere all over Instagram. Turns out, it is also a key Harry Potter site in Edinburgh. It was here that Rowling finished her final Harry Potter book, Harry Potter and the Deathly Hallows.

Famously, she also wrote on a marble bust of the god Hermes in the expensive suite: “JK Rowling finished writing Harry Potter and the Deathly Hallows in this room (552) on 11th Jan 2007”. After that, Room 552 was renamed the J.K. Rowling Suite.

The hotel is great for afternoon tea or cocktails in the evening. Should you want to stay the night, be prepared to pay at least a £1000 per night. It would be the only way to get a glimpse of Room 552.

FACT OR FICTION: There is obvious proof that J.K. Rowling stayed at The Balmoral. Both the author and the staff confirmed it. She had trouble finishing the last book and needed to be somewhere without any distractions. A 5-stars hotel did the trick.

A post shared by Edinburgh By Hidden Edinburgh (@hidden_edinburgh)

Not a Harry Potter site that inspired anything in the books or Wizarding World, but still something pretty important. J.K. Rowling’s handprints were reproduced on flagstone in front of the Edinburgh City Chambers. It happened after the author received the Edinburgh Award in 2008 for her contributions to the city.

She is not the only writer or person who received this award. As such, there are other pairs of handprints next to hers by the Edinburgh City Chambers, off the Royale Mile.

Edinburgh has a lot of cafés that claim to be Harry Potter sites. Some have pretty convincing arguments, and such is the case of Spoon, formerly known as Nicolson’s Café. J.K. Rowling wrote part of Harry Potter and the Philosopher’s Stone there.

Rowling did not have much money in her early years living in Edinburgh. She often went to cafés because she could write for the price of a cup of coffee. However, one of the reasons that Rowling spent a lot of time at Nicolson’s Cafe is because it was co-owned by her brother-in-law, Roger Moore.

Nicolson’s Café closed since. It has been replaced by a restaurant called Spoon. One wall has a plaque saying “J.K. Rowling wrote some of the early chapters of Harry Potter in the rooms on the first floor of this building”.

FACT OR FICTION: The plaque proves it is true. Plus, she said in a BBC Interview that Nicolson’s Cafe was where she wrote huge sections of the first Harry Potter book.

Former and current students at the University of Edinburgh will 100% know where Potterow is. And what type of establishments you find around there, i.e. pubs, clubs and bars. But not only. The street is home to student accommodations and a lot of restaurants and eateries.

Potterrow Port is a pedestrian underpass tunnel under Potterrow Street. There is not much to see here for Potter fans other than the signs.

FACT OR FICTION: There is absolutely no evidence that the street influenced Rowling in naming Harry Potter.

Just like Rome, Edinburgh is built on nine hills. One of those hills, Castle Hill, is home to the very famous Edinburgh landmark that is Edinburgh Castle. According to some fans, it is also a significant Harry Potter site. To be fair, at this point, the entire city has a magical vibe so why not.

Edinburgh Castle is a fortress castle with existing buildings dating back to the 12th century. Some say it was an inspiration for Hogwarts in the Harry Potter books. Because it is the most recognizable landmark in the city, it is also the most touristy one. Located at one end of the Royal Mile, you’ll see it from multiple viewpoints from around the city and it is easy to visit.

Whether it is indeed connected to Harry Potter or not, and whether you are a fan or not, you should definitely check it out. The view of the city from Castle Hill is simply incredible.

FACT OR FICTION: J.K. Rowling has not named any locations as being an inspiration for Hogwarts. Only that the school is in Scotland.