Yes, I know, it is already January 2020. But what can I say? I wanted to tell you all about what I read in December 2019 a long time ago but you know, sometimes life and procrastination get in the way. Or not feeling like blogging for a while. But better later than never, am I right?! There will be five books in this December 2019 reading wrap up. Overall, I’d say I am quite happy with this month of reading. So, without further ado, let’s dive in!

Synopsis: Two worlds are poised on the brink of a vicious war. By way of a staggering deception, Karou has taken control of the chimaera’s rebellion and is intent on steering its course away from dead-end vengeance. The future rests on her.

When the brutal angel emperor brings his army to the human world, Karou and Akiva are finally reunited–not in love, but in tentative alliance against their common enemy. It is a twisted version of their long-ago dream, and they begin to hope that it might forge a way forward for their people. And, perhaps, for themselves.

But with even bigger threats on the horizon, are Karou and Akiva strong enough to stand among the gods and monsters?

My review: I read book 1 of the trilogy back in July and book 2 back in October and I absolutely loved them! They were amazing books, that I read without being able to stop. The books were getting better and better. Book 3 made not exception and was the best conclusion possible to the saga. Even though the open ending can sort of let us hope for a fourth book.

I loved the characters which continue to develop and grow, who overcome their prejudices, admit to their mistakes. The alliance between rebellious angels and chimera was so fragile yet touching, full of hope, even funny at times. The humor was always there when it needed to be. We had angels, chimeras, humans working together to save the world despite their differences and brutal past. There was so much mystery and suspence with some new elements added to the plot,  new characters, new mysteries solved bringing in even more questions.

I had a blast reading this trilogy and when I closed book 3 I was sad that it was over, but it probably also is the best book in this December 2019 reading wrap up! I highly recommend this trilogy! The author’s imagination is incredible and her writing is amazing!

Synopsis: When Roselyn, daughter of the universe, learns humanity’s growing disregard for Earth’s health is putting her mother’s life in danger, she volunteers to nurture a new spirit for the planet’s rebirth.

Roselyn arrives fresh from the world of ancient sunlight in 1784, and she soon discerns that human life is dispensable if she is to succeed in fulfilling the prophecy of the next world.

Roselyn’s actions are not as compassionate as one might expect from a goddess born from the planet Venus. But when Roselyn finds the spirit of Earth growing inside a young girl whose parents have hidden her away from the world, she finds herself feeling more compassionate—and more human—than she ever thought possible.

My review: I read this book as part of a challenge I did on my Booktube channel. It was in the category “Nature Writing” which is absolutely not my genre of books. I was still open to reading it though, discovering a new genre. Unfortunately, I did not really enjoy this book. I cannot say I disliked it fully but I did not connect with the story.

I felt that the book had a very moralizing and guilt-tripping undertone which I did not appreciate. The characters were either blend, unbearable or huge hypocrites. I could not care for them. The end of the story felt very rushed and incomplete. The theme was interesting and something I quite care about. However, how it was talked about in the novel did not work for me. There was a pinch of sexist clichés in there as well: the dutiful wife, the overprotective father, etc. Not a win for me unfortunately.

Synopsis: When the Knight Bus crashes through the darkness and screeches to a halt in front of him, it’s the start of another far from ordinary year at Hogwarts for Harry Potter. Sirius Black, escaped mass-murderer and follower of Lord Voldemort, is on the run – and they say he is coming after Harry.

In his first ever Divination class, Professor Trelawney sees an omen of death in Harry’s tea leaves…. But perhaps most terrifying of all are the Dementors patrolling the school grounds, with their soul-sucking kiss….

My review: I am not gonna spend a lot of time on this book. I adore Harry Potter. It is a series I love reading and whose movies I love watching. I could read and read the books again. However, as I re-read the books while being older, I do spots aspects of it that disturb me a bit and sometimes really annoy me.

Book 3 is mostly okay on that front for the most part, except for Ron and Snape. What a little prick Ron is to Hermione. He is so mean while she just wants to help. And she is also right about everything by the way. As for Snape, he is so mean in the book, much more than in the movies. It struck me quite hard in this book. Still adore the series but, yes, spotting here and there, things that I did not see before.

Synopsis: Spensa’s world has been under attack for decades. Now pilots are the heroes of what’s left of the human race, and becoming one has always been Spensa’s dream. Since she was a little girl, she has imagined soaring skyward and proving her bravery. But her fate is intertwined with her father’s–a pilot himself who was killed years ago when he abruptly deserted his team, leaving Spensa’s chances of attending flight school at slim to none.

No one will let Spensa forget what her father did, yet fate works in mysterious ways. Flight school might be a long shot, but she is determined to fly. And an accidental discovery in a long-forgotten cavern might just provide her with a way to claim the stars.

My review: I am a huge fan of Sanderson. Warbreaker was amazing and Mistborn is incredible. And to be honest, I loved Skyward just as much, if not even more. My second favorite book of this December 2019 reading wrap up!

I loved this book. The plot is so well-written, with a lot of mystery, a lot of suspence, a lot of questions. The characters are so endearing and it is so easy to care for them. There is always so much more than meet the eye and everybody learn that at one point or another in the novel. We see so much in this novel: new society, underground civilization and cities, advance technology, political intrigue, legacy (whether good or bad), being cast aside because of what a family member may have done, war, death. There is so much in this book and the author does not shy away from describing everything. I bought book two earlier this month and can’t wait to read it!

Synopsis: Lei, the naive country girl who became a royal courtesan, is now known as the Moonchosen, the commoner who managed to do what no one else could. But slaying the cruel Demon King wasn’t the end of the plan—it’s just the beginning. Now Lei and her warrior love Wren must travel the kingdom to gain support from the far-flung rebel clans. The journey is made even more treacherous thanks to a heavy bounty on Lei’s head, as well as insidious doubts that threaten to tear Lei and Wren apart from within.

Meanwhile, an evil plot to eliminate the rebel uprising is taking shape, fueled by dark magic and vengeance. Will Lei succeed in her quest to overthrow the monarchy and protect her love for Wren, or will she fall victim to the sinister magic that seeks to destroy her?

My review: I read book one back in May and I really liked it. It was a very good surprise as I was not expecting much of it. But book one was a blast. Book two on the other hand…

First of all, nothing happens until the 400th page, then everything happens at once and feels rushed and erratic. The events bring the reader and the characters back to the beginning so it feels that it was all for nothing. Some characters’ change of personality do not make sense. The political intrigue that I loved so much in book one leaves space for the romance and just that. The relationship was so endearing and touching in book one but turns into something borderline toxic.

Also, I get that when you are in love you cannot stop looking to your partner but every time love outpouring happened, it always was in the worst time: on a battle field,  in a fight, etc. Thus, the whole relationship and by extension the whole book turned somehow cheesy. What had made book one great was not there in book 2. Such a shame. The big deception of this December 2019 reading wrap up.

So that’s all for all the books I read in December 2019. Five is a good number and overall,  it was a good reading month. 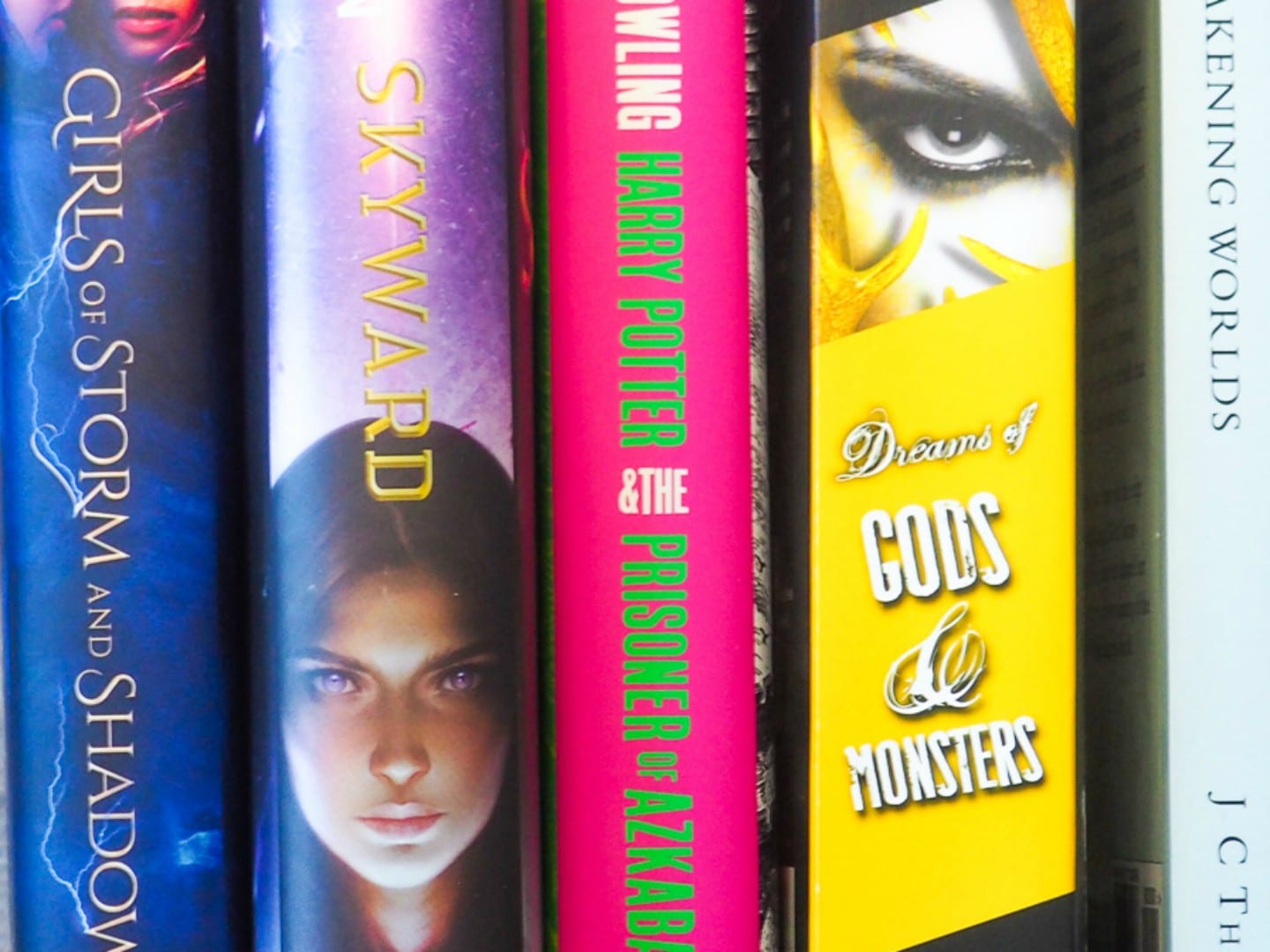 What did you read last month? What’s in your December 2019 reading wrap up? Any good books? And recommendations for us?

I am adding English subtitles to my Youtube videos! Audio is in French but English speakers can still watch them!